Gulliver's Gate is a new-ish exhibition near Times Square that is basically the world in miniature. It's incredible. There's a mind-boggling amount of detail and extremely impressive craftsmanship. It has a huge section devoted to Manhattan, and then smaller sections for all different cities and countries around the world. (And also an airport and some freestanding landmarks.) You can also take a peek into the workshops where they make the various pieces, which seemed cool but I was there on the Sunday of Columbus Day weekend and it was so busy I couldn't really get close and certainly couldn't talk to any of the people working. (AND there's a place to get a 3D printed version of yourself made!)

I'm having trouble even finding the words to describe how incredible and intricate this is. I could have spent hours and still not noticed everything.

To give you a taste, here's part of the New England section: 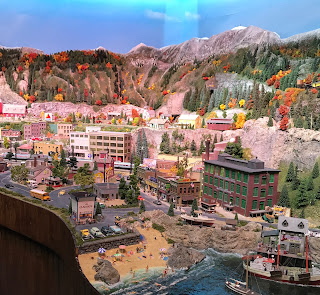 They also added all sorts of cultural figures to various sections (some of which made more sense than others, honestly). Here are the tiny Beatles! 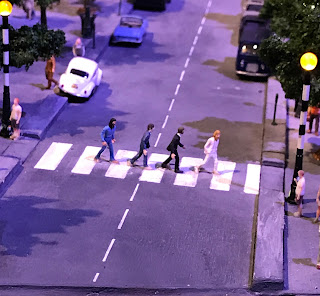 It's definitely worth the trip, though the amount of stuff going on was almost overwhelming and it was hard to feel like I was really appreciating the workmanship when the exhibit was crowded. Like so many things, I would have enjoyed it more were other people not allowed. Failing that, I'd recommend trying to go during the week (though maybe then there are lots of field trips?) and certainly not on a holiday weekend as I did.
Posted by Kate Linnea Welsh at 3:24 PM

Email ThisBlogThis!Share to TwitterShare to FacebookShare to Pinterest
Tags: museums