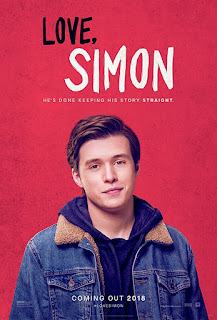 March has been pretty great for movies for me - I loved Black Panther and A Wrinkle in Time and now Love, Simon. Like Wrinkle, Simon was based on a book I really liked, though this one I read as an adult so I wasn't attached to it in quite the same way. (By the way, the book is called Simon vs. the Homo Sapiens Agenda; they changed the title for the movie, which I think was wise since it's a bit of a mouthful. I definitely recommend both.)

I needn't have worried either way, though, because this was a great adaptation, quite faithful while changing what it needed to change to make the movie work as its own thing. I expected to like the movie (partially because several of my friends saw it first and all said good things) but I LOVED it, which was a nice surprise. It's the first mainstream wide-release teen gay rom-com, and the love story is great - I want to be careful not to spoil anything, because who the love interest IS is a bit of a mystery, but it involves falling in love with someone through their words, which I always enjoy.

There's a lot to love aside from the romance plot, too: Simon's coming out story is well done; it's difficult for him in a very real way that somehow doesn't take away from the overall joyful tone of the movie. As you'd expect from a high school movie, lots of characters are figuring themselves out, not just Simon, and there are great family and friendship plotlines along with the romance. And what really got me was the whole atmosphere of the movie: the soundtrack is great, the writing is funny and smart, and the costumes and production design were right on; together they all made a world I wanted to stay in as long as possible.

Also, a warning: This movie will make you want Oreos.
Posted by Kate Linnea Welsh at 3:00 PM

Email ThisBlogThis!Share to TwitterShare to FacebookShare to Pinterest
Tags: books, movies, YA