BTW, I have a tinyletter! Here are some FAQs.

You have a what now?

A tinyletter! It's called Kate Reads, because I am very good at coming up with creative titles for things.

Technically, it's just a specific brand of email newsletter. Colloquially, it tends to be an informal, chatty thing people write and send out relatively frequently, often focused on a specific topic or area of their lives.

Okay, so what's YOUR tinyletter?

As you might have guessed from the title, it's about books! I send out a few paragraphs roughly twice a week about what I'm reading.

Not exactly. Less formal than that. I think of it as sort of a diary centered on what I'm reading, with tangential mention of whatever's going on in my life and/or the world. But it depends. Sometimes it's focused on one book, closer to a review. Sometimes a book makes me muse about a topic more broadly, like in yesterday's about what makes some retellings of classics work better than others. Sometimes I do a roundup of quick thoughts on a bunch of things I've read that week (especially if I've been traveling or something), like this. Sometimes I do end up talking about my feelings and what I'm reading to deal with them, like on the anniversary of the election.

So is this about politics and current events a lot?

Nah, not really. I know I said at the beginning that I was going to weave in current events, and I know some people (understandably) avoided it because they get enough of that elsewhere, but it turns out . . . I usually get enough of that elsewhere, too. So this usually ends up being just "UGH, this WEEK, you guys, okay, let's talk about books." (Obviously the exception is if a book I'm reading deals with political or other newsy themes - then I'll talk about that like I would any other subject matter.)

You just enter your email on the subscription page and tell it you're not a robot. It will then send you a confirmation email with a link you have to click, and after that my letters will arrive right in your inbox as soon as I send them.

Well, I can't make you do anything, can I? But if you mean whether you can read without subscribing - sure. There's a public archive you can check whenever. But if you subscribe, the emails will just appear and you won't have to remember to check. And I write them as emails, not as posts. (I find the letter conceit sort of charming, which is part of why I decided to talk about books that way rather than on a blog.)

Nope, and nope! Totally free/no ads for you. Free for me. Tinyletter is owned by MailChimp and I guess they just do this with some leftover server space out of the kindness of their hearts? (It's very no-frills and has a subscriber limit; I assume the idea is for bigger customers to "graduate" to the paid MailChimp service.) The only money involved is via the Amazon links I put in to the books I'm talking about - if you happen to click and buy it (or something else while you're on the site), I get a couple cents in Amazon credit to put toward MORE books to read and tell you about. It's a great/terrible cycle. (The book price isn't higher for you or anything; I just get a bit of the money that would otherwise go to Amazon.)

Are these really frequently asked questions?

I mean, I guess it depends on your definition of "frequently," but they're all . . . asked questions, yeah.

Why are you answering them NOW?

Honestly? Because it's December 1st and I have exactly a month to get my subscriber count to the completely arbitrary and meaningless goal I made for the year. If you're someone who likes my blog, I figure hey, you might also like my tinyletter, if I tell you about it. So I am! Come subscribe!
Posted by Kate Linnea Welsh at 3:00 PM

Email ThisBlogThis!Share to TwitterShare to FacebookShare to Pinterest
Tags: books 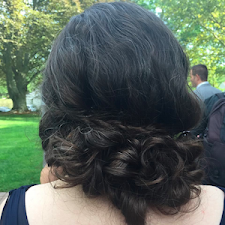