Adagio Teas has made a name for themselves in fan-created fandom teas - there are hundreds of fandoms, including TV shows, book series, movies, bands, even politicians. Adagio sent me a voucher so I could pick out some fandom teas and review them for you! I got small sizes of a whole bunch of different things to try, so my reviews will be split between a few posts over the next few weeks. But first, let's talk a little more about the concept, packaging, and other generalities.

Look, here's my box from Adagio! 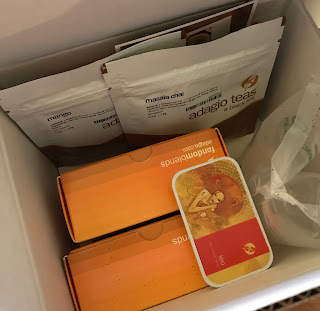 As you can see, I opted for mostly little tins, so I could try as many teas as possible. (The teas also come in 3oz pouches and 5oz tins.) They came in boxes that hold six tins, with one tin and samples in packets loose. The scent when I opened the box was very strong and I worried a bit about all the teas kinda tasting alike since they'd been packed together that way, but that hasn't been an issue so far. Everything was covered in a fine coating of tea dust, though, so for that as well as the scent reason I wished the tins had been individually shrink-wrapped, though that might have been prohibitively expensive.

The tins and their art are decent quality - the art is provided by the fans who make the blends, and it varies wildly; I was careful to pick only teas with art I liked. (This meant ruling out some fandoms I'd otherwise like, but I figured the art is a big part of the point here, and I didn't want to think "ugh, that's ugly" every time I looked at the tins.) I figure I'll keep my favorites of the tins to use for bobby pins, knitting notions, paper clips, etc. These tins are COMPLETELY packed full of tea, and while I appreciate that they don't want to skimp, it makes them a bit hard to open without spilling. But after the first cup it should be easier.

My big struggle with anything like this is always that I want to pick by character/theme regardless of whether I'd actually like the flavor. And I'm a bit picky about tea - most of the fandom teas were some variety of flavored black tea and that's not my favorite. (I like plain black, or herbal with various flavors, but not... together? I don't know.) So while I was picking out teas I had to keep having very stern discussions with myself regarding ordering things I'd at least have a chance of liking.

One example of this was with the Women of Victorian Literature series. (As an aside: Some of these writers were not in fact Victorian. WORDS HAVE MEANINGS.) I liked the concept and design of the tins, but the flavor that sounded best to me was peach, and that corresponded to Kate Chopin. CONFESSION: I've never read Kate Chopin. (Maybe a story or two in college?) But... no time like the present, right? 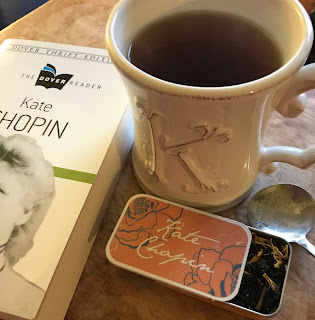 This series is a blend of almond and vanilla oolong, with a different fruit flavor for each writer (some corresponding to where the writer lived, like cranberry for Alcott), and as I mentioned, Chopin was peach. This was an enjoyable tea - the peach flavor was present but not overpowering, and it tasted very natural. I didn't really taste the vanilla or almond in a distinct way, but I think they blend decently to make the flavor more complex. This might be good iced for your summer reading/sipping pleasure. And now I have an excuse to finally read The Awakening.

Next time... Game of Thrones tea! 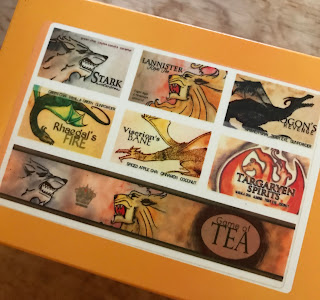 If you'd like to try any of these teas, let me know and I'll send you a $5 voucher! Disclaimer: Adagio gave me free tea with the understanding that I would post about it; all opinions are my own.